Memories of my Dad (who crossed the street)

Memories of my Dad (who crossed the street) 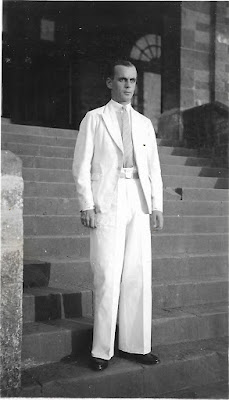 My mother was Mary and my dad was William (Bill).

Mary's family owned a Fish and Chip shop on the main street in Hyde. This was when all was done by hand, including peeling the massive amount of potatoes needed. So they hired a young boy to peel. That was my dad.

He fell in love with the daughter of the family. But his home life was tough. So he left as soon as he could and joined the Army.

He served peacekeeping missions in the Sudan, Egypt and India.

All went well for a few years and he was about to return home on leave, looking forward to seeing his sweetheart Mary. But his transport was stopped in Malta due to a slight glitch. Somebody declared WW2.

He was on Malta for the entire siege, mainly as an anti-aircraft gunner on the Bofors gun. Towards the end of the war he saw action in Germany as his Regiment was assigned to rounding up the German High Command. He was wounded and flown back home. After his recovery he was kitted out for deployment to the Pacific Theatre, but this deployment was cancelled when the United States dropped the Atomic Bomb on Japan.

Finally, after surviving years of action, he was demobbed in 1945. So he went home and married Mary.

I was born in 1949. Mary became a homemaker and a part time glove machinist. Bill worked for the post office.

When he died I went for a viewing at the Funeral Home. It was on the main street in Hyde. It was a tiny room. I looked out of the window by the end of the casket and saw the Fish and Chip shop. He had crossed the street, but with a lifetime, a world war and miles in between.